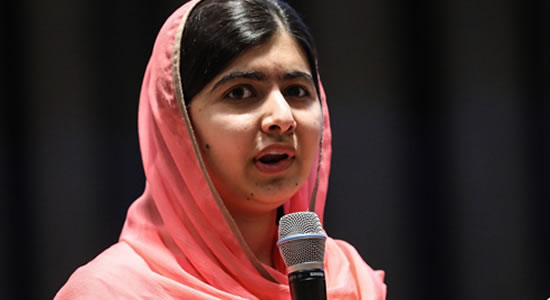 Nobel Peace Prize winner Malala Yousafzai, who was shot by a Taliban gunman for speaking out for girls’ rights to an education, has been accepted by the University of Oxford. Accordoing to AP, the 20-year-old activist shared a word of her acceptance on Twitter and included the screenshot of her “Congratulations” notice.

She plans to major in philosophy, politics, and economics, the favored degree of many of Britain’s top leaders.

“So excited to go to Oxford!!” she tweeted Thursday.

Yousafzai will study at Lady Margaret Hall, an Oxford college whose notable alumni include the late Benazir Bhutto, the one-time leader of Pakistan and a hero of Yousafzai’s, and Myanmar’s Aung San Suu Kyi, a fellow Nobel Peace Prize winner.

Yousafzai won international renown in 2012 after she was shot by a Taliban gunman in Pakistan as a teenager for speaking out for the right of girls to go to school, a topic she started raising publicly as an 11-year-old with a blog.

After being treated at a hospital in Birmingham, England, she continued her education in the city and went on to win the 2014 Nobel Peace Prize.

“As far as I know, I am just a committed and even stubborn person who wants to see every child getting a quality education, who wants to see women having equal rights and who wants peace in every corner of the world,” she said on the day she collected the Nobel.

“Education is one of the blessings of life, and one of its necessities.”

Her acceptance to such a famed university marks a milestone in Malala’s steady progression to achieve her dreams.

Social media erupted into the technological equivalent of rounds of applause.

Among those offering accolades where author J.K. Rowling and Alan Rusbridger, the former editor of the Guardian newspaper who is now the principal of Lady Margaret Hall.

He tweeted: “Welcome to @lmhoxford, Malala!”

Others pointed out that Oxford was about to get a Nobel laureate not on the faculty but in the student body.

“To be fair, I think we should be congratulating Oxford,” novelist Julian Furman tweeted.

Malala’s father, Ziauddin Yousafzai, all but burst with pride.

“My heart is full of gratitude,” he tweeted. “We are grateful to Allah & thank u 2 al those who support @Malala 4 the grand cause of education.”