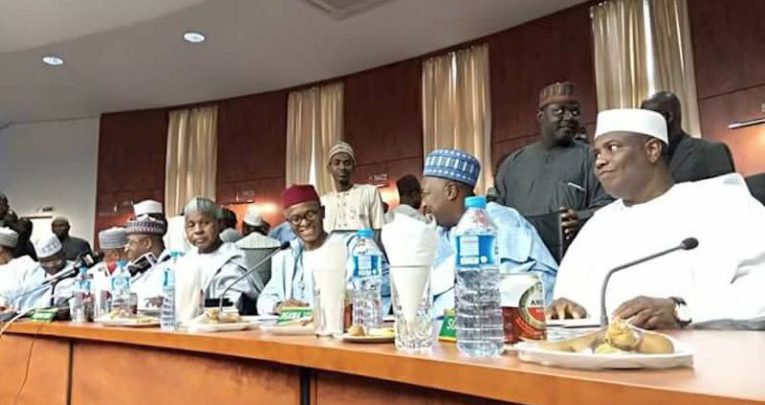 The Northern Governors Forum have today set for an emergency meeting in Kaduna state to discuss issues bordering on the value Added Tax (VAT) that have stirred a controversy in the Nigerian political space recently. The Coordinator of the Forum Secretariat who also doubled as the secretary to the plateau state government, Professor Danladi Atu, confirmed the meeting yesterday saying it will be hosted by Governor Nasiru El-Rufa’i of Kaduna state. This is coming as some senior lawyers have berated the Attorney General of the Federation, Abubakar Malami, who declared that no state has the power to collect the VAT.

The Federal High Court sitting in Port Harcourt had last month in its judgment ruled that Rivers state has the power to collect its VAT accrued in its jurisdiction.


This was against the Federal Inland Revenue Service (FIRS) stance which made the FIRS approach Appeal Court in Lagos to upturn the judgment; meanwhile, Lagos state filed an application to join River state as a co-defendant in the Appeal Court.


Meanwhile, the Appeal Court has directed that the status-co be maintained in the meantime pending its decision on the matter.

During an interview with Channels Television on Friday, the AGF has argued that VAT collection was exclusively a legislative list and therefore only the National Assembly can decide on the matter

.
In his statement, “As you rightly know, the issue of the Value Added Tax is an issue on the exclusive legislative list. And the implication of being on exclusive legislative list matter is that only the National Assembly can legislate on it. "The question that you may perhaps wish to address your mind on is whether there exists any national legislation that has conferred the power on the state to collect VAT. And my answer is ‘no’.

However, Malami's stance was countered by some senior lawyers like Mike Ozokhome SAN, and Ifedayo Adedipe, SAN saying Malami was wrong.

Ozokhome claimed that the VAT was in a residual list and therefore exclusively within the jurisdiction of the state government.

Ozokhome said, “If anything, it is residual and is strictly within the purview of state government in our federal set-up.

“As of today, there is a judicial pronouncement on it by the Federal High Court, Port Harcourt, to the effect that only states can collect and administer VAT.

In his contribution, Adedipe opined that VAT is a serious constitutional issue and therefore should not be politicized

.
He added that “Is this in the 1999 constitution or a new one? Which number or section? Let him state it. It is not enough to say it.

“I am not aware that VAT is on any exclusive list of the constitution of the Federal Republic of Nigeria, Adedipe added.

Meanwhile, the Secretary of the Northern Governors Forum said, “The northern governors will be meeting in Kaduna on Monday and I’m sure one of the items on the agenda is about the issue of VAT.”

Apart from Lagos and Rivers states, Ogun State has also started the process of passing a bill on VAT in its House of Assembly.