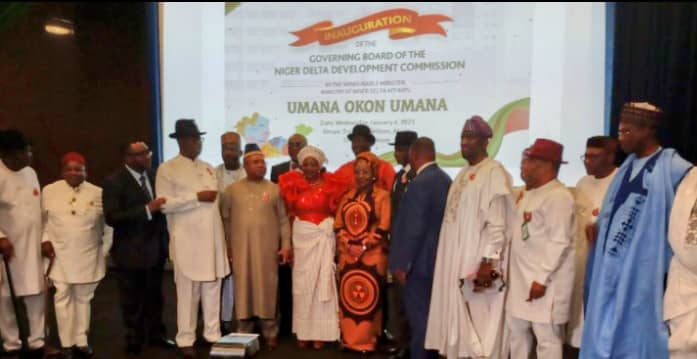 The Federal Government (FG) inaugurated the governing board of the Niger Delta Development Commission (NDDC) on Wednesday in a ceremony attended by the Secretary to the Government of the Federation (SGF), Boss Mustapha; Minister of Niger Delta Affairs, Chief Umana Okon Umana; amongst others.

Speaking during the inauguration, the SGF said, “It is the expectation of government that development of the Niger Delta will henceforth not be haphazard. It will now be full-time and full-blown such that Nigerians within that part of the country will benefit from the institution.

“We also expect that the board members inaugurated today would bring their experience to bear and ensure an equitable development within the different states of the Niger Delta.

“We, therefore, urge you to ensure compliance with government regulations, procedures, processes and extant rules and regulations.”

In her remarks, Lauretta Onochie, the new chairperson of the Commission’s board said, “Since its establishment by the NDDC Act, the Commission has received a lot of flack from all and sundry.

“Apart from the physical development of our region, we will be paying extra attention to the empowerment of our teeming youth population, equipping them with requisite skills to enable them catch up with their peers in other parts of Nigeria and elsewhere.”

In December 2022, the Senate confirmed the nominations of the Chairman and Board Members of the NDDC, following President Muhammadu Buhari’s letter which stated that their nomination was in accordance with the NDDC (Establishment) Act, 2000.