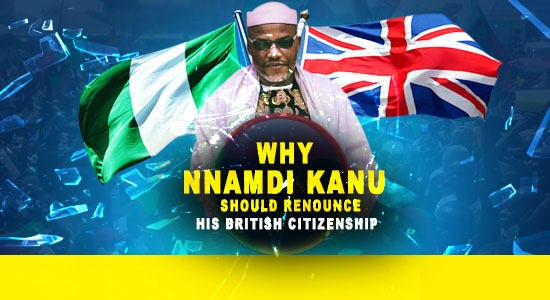 Some people are currently beating the drum of war in parts of Abia and Rivers States. Many young men are putting their lives on the line not realising that they are mere pawns on the hands of chess masters safely tucked away behind high fenced buildings in Lagos, Abuja and other foreign lands.

Many of them have their children studying at the various expensive private schools in the country or living abroad, while they encourage the children of the poor masses to take up arms to challenge the military. They have also insured that in the event of war, their children will be safely ferried away to foreign lands where they hold dual citizenship.

This reminds me of one of my favourite movies of the 90s, the war drama, ‘Saving Private Ryan,’ starring Tom Hanks and Matt Damon. In the movie, a group of U.S. soldiers go behind enemy lines to retrieve a paratrooper whose brothers have all been killed in action, living him as the last surviving son of his parents.

The movie which was set during the Invasion of Normandy in World War II, explored the impact of war on the family especially the men who are at the war front. I can relate with that situation as my father (may God rest his soul) was the only surviving male child of his parents as a result of the Biafran war. In his case, he was saved by his small stature as he was considered too small to carry a gun.

My father lost three of his brothers to the war and my grandmother never truly recovered from the shock. As a result, he was encouraged to marry at a very young age to propagate the family lineage being the only surviving son of his parents.

And although the birth of my brother and I, in quick succession brought immeasurable joy to my grandparents, the distant look in grandma’s gaze often betrayed her sadness.

However, she wasn’t the only one traumatised by the Biafran war, several other women in my village often recalled their experiences especially on rainy days when the rumbling sound of thunder brought back memories of explosion and gun fire. And until her death few years ago, we could never watch war movies in her presence, as it brought back memories of the war. Anybody who grew up in the villages can relate to this.

As a young man growing up in the post civil war era in the East, we heard different versions of what transpired during the war. One of such version is that the Biafran army was at the verge of victory when Ikemba Odimegwu Ojukwu went into exile. This they claimed demoralised the soldiers and made them to surrender.

This particular version created a love-hate feeling in me towards Ikemba: Love for his bravery to stand up and defend his people; and hate for him ‘running away.’ In my naivety, I had believed that if Ikemba had stayed behind, perhaps the Biafran war would have had a different outcome, and my uncles would not have died in vain.

Over the years, I have watched as different personalities tried to resurrect the dream of a Biafran State. In my view, the Biafra agitation has become to the East, what Sharia and resource control is to the North and the South-South; a tool for manipulating the poor masses and a rallying point for individuals who want to exploit our primordial sentiments for overnight fame and self enrichment.

Just few weeks ago, I was amazed to watch a video on the social media of young Igbo men, tearing their Nigerian passport as a sign of their rejection of the country and embracing the new version of Biafra being promoted by IPOB.

This brings me to Nnamdi Kanu, the present actor in the Biafran saga. Kanu is a dual citizen of Nigeria and Britain, and currently carries the passports of both countries. Few weeks ago it was reported that Kanu had bought a bigger house in London close to his former apartment.

That news gave me the impression of someone who’s either preparing to flee or expand his household.

During his detention by the Nigerian government, Kanu had reached out to the British government to push for his release. In a letter dated March 24, 2017, and addressed to the UK High Commissioner in Abuja, he reminded the British government that he is a full British citizen, and is therefore entitled to all Rights, Privileges and Protection, guaranteed under the British Laws and conventions.

This is rather ironic for a man who claims to be more Igbo than Chief Nnamdi Azikiwe, Ikemba Odimegwu Ojukwu and every other Igbo man who dared to challenge him.

A popular Port Harcourt based preacher has a by-line for his TV programme to the effect that “if a man has too many alternative, he may never succeed.” According to him, if you want to achieve a goal, you must be focused on one course of action.

The fact that Kanu holds a British citizenship and has demonstrated his readiness to exploit it when he is in trouble, makes me question his commitment to the course for which he is urging others to die for. If he can’t endure being locked up for the same course, what moral justification does he have to ask you die for it?

I want a Nigeria in which I am treated equal and not discriminated against simply because I am an Igbo man. I believe we the Igbos have not gotten a fair deal in the present arrangement. But if the Yorubas and other regions are calling for restructuring of the country, it also means they are not satisfied too. We must therefore align with the other regions in finding a political solution that works.

However, if Kanu wants me to take him seriously, he must start by renouncing his British citizenship. That way, I know that we are in this together.