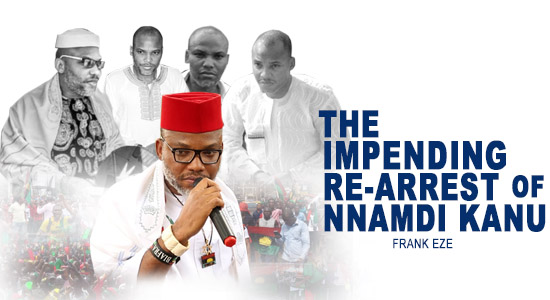 I have been asked severally why I chose to stand against a fellow Igbo brother over the rejuvenation of Biafra dream. Several aspersions have been cast on me simply because I differ with the fraudulent approach of Nnamdi Kanu and his scamming of the entire Igbo nation in the name of Biafra.

First Kanu is self-centered, attention-seeking, greedy and highly opinionated. He lacks fundamental qualities of a leader. For instance, while mobilizing for Kanu’s release from detention and other IPOB leaders including Chidiebere Onwudiwe, Benjamin Madubugwu, and David Nwawuisi, we discovered that our wholesale strategy aimed at securing their simultaneous release from detention at the same time was not feasible.

Hence we changed strategy and focused agitations on Kanu’s release, with the aim that upon his release he will spearhead the release of other comrades in detention at the Kuje Prison. However, since his release, Nnamdi Kanu has hardly done anything to ensure the release of these fellows. He has hardly mentioned their plights not to talk of him initiating concrete action(s) for their release. Rather Kanu has made the Biafra struggle all about himself, his opinions and views.

Second, during a strategy meeting with Kanu’s lead counsel, Ifeanyi Ejiofor (Barr.), it was agreed that Kanu will abide by all aspects of his bail conditions, which came about after a lot of lobby and interface with relevant stakeholders. Amongst other conditions, Kanu was required not to grant interviews, involve himself in any rallies, and not found in a group exceeding ten (10) persons. In her ruling, Justice Binta Nyako warned that a violation of any aspect of the bail conditions would see Kanu return to prison.

However, Kanu has remained adamant and chauvinistic in his gross attempt to make himself the center of the struggle. He has practically violated vital aspects of the bail conditions, and if the government comes after him today, many well-meaning Igbo sons and daughters will not blink an eye. He has toed the path of violence and remained a threat to our collective political fortune. It wouldn’t make sense for us to lose on both ends, especially as the 2019 general elections draw near. Our stand still remains that we work together to ensure that Ndigbo gains her rightful place in the Nigerian project; we have examined it back and forth and come to this conclusion that we may be better for it.

Third, Kanu’s audacious call for a boycott of elections in Anambra State is not just appalling but a total demonstration of irresponsibility and a lack of focus. This singular posture has waned Kanu’s popularity amongst the Anambra people, where he commanded a large following until recently. The people of Anambra are ready to resist Kanu’s antics any day. Anambra has remained the shining light of Ndigbo in the past six to seven years, so the people are not ready to throw away their destiny on the basis of such uncertainties which Kanu and his group of agitators represent.

Fourth, with the launch of the rag-tagged Biafra Security Service (BSS), Kanu has publicly presented himself as a militant leader. This may come with its own consequence(s), as the Nigerian government may be provoked to act in ways that would see Kanu return to Kuje prison.
The question now is what if Nnamdi Kanu is rearrested? My answer is – Ndigbo would go to sleep. Nnamdi Okwu Kanu is a scammer. He is a criminal mind who is out to take advantage of the same people he claimed to be fighting for. He is not worth the attention he craves for.