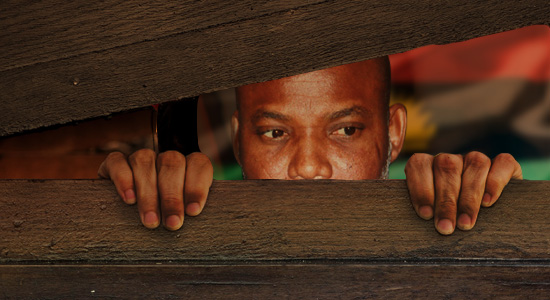 Recent events in my beloved South East have vindicated me. Earlier on, I embarked on a self-imposed assignment to rediscover youths that have been brainwashed by the divisive and deceitful rhetoric of Nnamdi Kanu. I carried out the assignment by publishing articles to reawaken their consciousness and open their minds to the futility of Nnamdi Kanu's struggle. I also attempted to reveal the real purpose of his campaign.

Although I received several mails appreciating my efforts, some misguided youths suspected to be members of the BSS and the so called National Guard sent me several threat messages. Today, "how art the so called mighty fallen". They have all ran into hiding as predicted by President Buhari in his last national broadcast. Let me commend the South East leaders for facilitating the gradual withdrawal of troops from Abia.

Meanwhile, I came across a facebook post by Kelechi Mbianozie who is a Global Affairs Strategist written from Greater New York City Area. I therefore align with his thoughts and sentiments, so I decided to share:

Nnamdi Kanu, the acclaimed leader of IPOB was not supposed to be in any hiding, never. The fact that he is not operating openly now tells you all something, he is on the wrong side of this agitation again. The struggle for self-determination even if possible, transcends beyond an individual. Kanu was advised to rally around the traditional and political leaders of the South. As an Igbo man, I was taught honor, respect, love, self-giving, and honesty by my parents and the community where I grew up. You cannot bring a fight inside the house, if you do, such a person is considered a fool. When Kanu was released, he enjoyed the encomiums of the majority of Nigerians who saw the Federal Governments lawless detention as evil and unconstitutional because he never committed any crime to be locked up for 2 yrs.

He was hosted by Senators and Governors, his father's house became a Mecca of sought, he enjoyed the people's patronage. Not until the butterfly started thinking himself a bird, the self-aggrandizement overwhelmed him so much that he declared: "there would not be any election in Anambra" and his reasons? Because Kanu said so. He brought the battle into his home. He started receiving Genuflection as a tiny god he approved himself of, and even Senator Abaribe who was among the people that signed his bail surety couldn't speak reason into his skull, he spoke to him, Eastern Governors and some traditional rulers spoke to him, he was too pompous to apply wisdom, humility, and honor, but he wants others to accord him the same. Now, all those people who would have stood behind him are doubtful of his intentions, so they stayed clear of him. Now, that they have started chasing him, where will he run into? "Lack of wisdom"

Now, this is his SIN. The moment he commissioned the local army on record, posted it out on social media and spoke openly at a rally about the need to have the Biafra Secret Force, he failed from grace, he not only entered into the nest orchestrated by the Nigeria State, he ignited the article in the Constitution of Nigeria that prohibits anyone from organizing an army against the sovereignty, whether you like it or not, Nigeria is a sovereignty, Biafra is not and was never so it is not even a conquered territory. We reached out to Kanu, advised him to be cautious and apply wisdom, he never listened, he cursed everyone who disagreed with him, we are all "Efulefu". He cut off his communication channel with those who would have helped.

Instead of calling for the boycott of Anambra Election, even when you are not from Anambra, you could have channeled that energy to become a political force in the East, compel your followers to come out in masse and vote in the election and ensure that they elect a credible non-corrupt Governor and House Assemblies knowing that every power and politics is local, you would have scored a gigantic political WIN right there and the Federal Government will start taking you seriously. You ensure that the same thing in Anambra is replicated it in all the South Eastern and the South Southern States, unseat all these criminal Senators, House members, Governors and let us have our own devoted people represent us for once, NO, Nnamdi was so arrogant that he forgot his culture. Anambra of all places, the home of Azikiwe, where we have the timbers and calibers of the East, they saw his affront as an insult, just there alone, Kanu diminished his patronage among Eastern Elders who would have been his backbone. (Elders stays at watch as they send the young to battle).

In the course of my career, I have seen deaths, people who died in the face of war and the earth refused to bury them, their carcas decaying that even vultures were so full that they could not feed anymore. I have seen men, real men, rebels in the face of war, their skulls shattered, their bones and legs ripped off, some bled to their death, but among all, there is nothing like the sight of an amputated spirit, hahahahaaaa, there is no prosthetic for that.

Every single information coming out of his house was fake news propaganda that the UN did this or that was all LIE. We are here at the UN Headquarters and never a time has any issue about Biafra brought to bear in any open sessions, General Assembly, Security Council Consultations, never. But our gullible hardworking brothers whom he met at home never wanted to listen, they believed his lies. The agitation must be seen as non-violent as possible. The flagrant disregard of any advice was appalling. In the scheme of things, you need strategists, advisers, foreign policy analysts, intel ops and lots of professionals to sit down and drive a master plan, Kanu assumed all these responsibilities and was very bad at them. So far, you can see that he is not a strategist, knows very little about building coalitions within and outside Nigeria, I mean coalitions of friendly countries who can reason with the cause, on many occasions, he switched off his phone because he is a stubborn overlord, look at the carnage he has caused and where is he now? in hiding.

There wouldn't have been any need to hide. He should have been entering the Villa and House of Assembly, lobbying and strategizing, that's how wise men WIN. Remember, 'She stooped to Conquer' "

The facebook warriors who are good at calling people names on facebook and cannot have dialogue and reason together, over to you, let your name calling continue, how many people are dead now because of Kanus irresponsible stubbornness? And among all those deaths, none of his family members are involved, now the government of Nigeria has categorized IPOB as a terrorist organization, that's what you get when you start to organize an army, its going to be tougher for Easterners who are travelers. My advice, if you wish to travel outside Nigeria, clean up your social media platforms, you could be turned back at any point of entry because of what the Federal Govt just did.

Final words, all of you that are noise makers on social media, have you ever thought of something very covertly possible? That Nnamdi Kanu may have been paid off to quash the Biafra struggle once and for all? That all these charades were staged? hahahahahaaa, Why did he object against any good advice to go about this struggle perfectly and legitimately? He came back from the UK, was arrested by the Nigerian government that is more or like subservient to the British Lords, Ndi Igbo, wake up before the water reaches your necks.

If we fail to apply wisdom in settling our impasse, we will all perish as fools. I am not going to perish because I see things differently. I don't wish anyone death, can we now wear our thinking cap?? Now?? I mean Now?