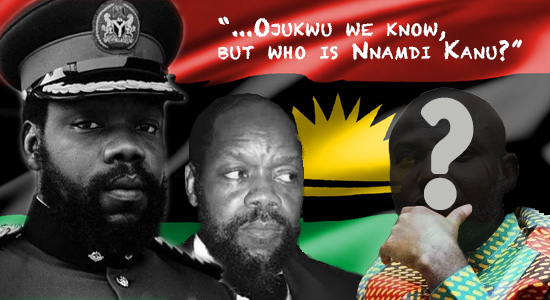 Up until May 30, 1967, there was nothing like Biafra, either as a nation, geographical territory, struggle or political movement as some will now like to refer to it. Ab initio what is now commonly known as Biafra encompass mainly all the south-east states including parts of present-day Rivers, Bayelsa, Delta, Akwa Ibom, Cross River and Benue States.

Many, as I personally do, align with the school of thought that Biafra was a child of circumstance that eventually became a child of necessity. Events leading up to the 1966 coup d’état, the counter-coup, subsequent chaos and lawlessness that followed, including the pogrom on persons of Igbo extraction in Northern Nigeria, led then, by Lt. Col. Odumegwu Ojukwu, Governor of the Eastern region, to declare Biafra’s independence on May, 30 1967. That was the final straw which led to the birth of the idea.

However, Odumegwu Ojukwu as an ardent believer in peace and the Nigeria project did not just call Nigeria a zoo of caged baboons. Despite all that was happening to his people and the suffering they endured, he took part in talks aimed at bringing an end to the hostilities. He encouraged his men to sign the Aburi accord, convened to find an amicable solution to the impending conflict. He never lost faith in a peaceful resolution of the crisis even after Nigerian government reneged on the earlier agreement.

Odumegwu Ojukwu was a peaceful man, committed to his people and very influential in many circles across political, religious and ethnic divide. He had panache, a hater of injustice, a great orator with the fluency of an actor according to a declassified American Embassy Cable from 1968.

He showed a hint of subtle remorseful expression on the civil war which he described as a culmination of actions and reactions years after the war ended, he had such great self-awareness.

Odumegwu Ojukwu was a hero, gentleman, intelligent, ambitious, a committed democrat, a firm believer in the Nigeria project. When Odumegwu Ojukwu returned to Nigeria to a hero’s welcome in 1982 after he was granted state pardon by the civilian government of Shehu Shagari. Odumegwu Ojukwu quickly and fully integrated into the Nigerian State despite spending 12 years on exile in Cote d’ivoire.

He joined the ruling party at the centre, the National Party of Nigeria (NPN), to the disappointment of many who had hoped or wanted him to join the party that was in power at the state level, the Nigerian Peoples Party (NPP).

Since then, the call for the creation of the Republic of Biafra by several actors has historically been strident and recurrent since 1967. Needless to say, the clamour for the actualisation of the struggle has been sustained only by the shenanigans of scoundrels such as Ralph Uwazuike and the fraudulent Nnamdi Kanu who are all not worthy to untie the latchet of Ojukwu’s shoes.

To say the least, the concept Odumegwu Ojukwu had of the struggle has been distorted, misrepresented, twisted and capitalised on by the insidious characters seeking to ride on the shoulders of the Ikemba to deceive and hoodwink innocent unsuspecting youth in their quest for prominence and cheap fame and popularity.

Astoundingly, the delusional grandeur of Nnamdi Kanu to arrogate to himself the messianic toga of liberating the Igbos and seek self determination for them, calling for a referendum is at variance with the dictates and beliefs of Ojukwu, the progenitor of the struggle. Kanu has made a caricature of the struggle, the Igbos have him to blame if the dream of Odumegwu Ojukwu for a peaceful, just and equitable Nigeria where all Igbos will achieve their God given potential is not actualised.

When Kanu spoke, he used uncouth utterances that were de-humanising, disrespectful and disregarding to other people’s existence, and he desecrated the core tenets of his much acclaimed Judaism beliefs where the quest for peace and the praise for peace appear to be an obsession.

Nevertheless, Nnamdi Kanu had taken the wrong path; he made himself a king without a kingdom, ahead of a gullible and docile lot. He listened to no one, particularly the elders of the land, as he beguiled and hoodwinked many youths on his inglorious expedition for selfish and pecuniary reasons. His brand of Struggle is a hoax and remains a mere mirage.

It’s time for the Igbo under the leadership of Ndigbo Ohaneze to quit playing the ostrich and call Kanu to order. I watched a recent video where he mentioned that he was going to Abuja with about 2 million of his supporters for his court case on September 17, 2017. He informed his supporters to burn down Nigeria to the ground the day they learn he was arrested.

I know that by putting Odumegwu Ojukwu and Kanu in one sentence is doing great dishonour to the legacy of the great Ikemba. There is no basis for comparison, one is in the mould of nobles, and the other is not fit to be a serf in Ojukwu’s serfdom.

Odumegwu Ojukwu was an intellectually sound, charismatic, refined gentleman, an accomplished businessman, a dedicated family man, comes from a well known and influential family, that we all have come to know of him personally or read about him, Odumegwu Ojukwu we know but who is Nnamdi Kanu?