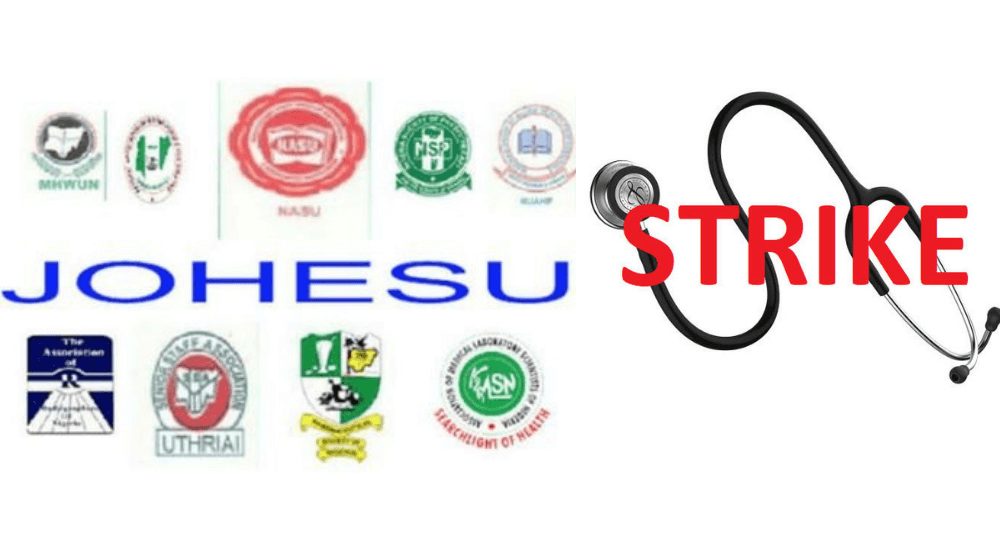 The Joint Health Sector Unions (JOHESU) and Assembly of Healthcare Professional Associations (AHPA) have suspended their planned strike scheduled to commence on Saturday, September 18, 2021. This followed a unanimous resolution adopted by the groups to step down the notice of strike and issued a fresh notice of 15 days. Following the emergency meeting of the expanded National Executive Council of the JOHESU and AHPA on Friday, the unions admonished the Federal Government to expedite actions and fulfill their demands within 15 days. This was contained in a communique signed by the acting National General, JOHESU, Mathew Ajorutu, issued at the end of the meeting. The unions had on September 2 threatened to embark on strike over unmet demands. The expanded NEC comprised the Presidents and General Secretaries of affiliate unions and professional associations, NEC members of affiliate unions, and JOHESU Chairmen and Secretaries at the State and Branch levels. The NEC-in-Session said it critically appraised the reports of JOHESU negotiation and conciliation meetings with FG since the declaration of the trade dispute through the 15-day strike notice issued on September 2.

The JOHESU Acting General Secretary, Chief Matthew Ajorutu, in a communique issued at the end of the Expanded NEC meeting said they have noted the appeal from President Muhammadu Buhari on the need to show understanding with his administration and the President’s pledge to pay any debt owed health workers.

Ajorutu said that NEC also received and examined reports of congresses held at various health facilities across the country on the mobilisation for the strike action due to commence 00hrs Sept. 18.

According to him, NEC after long hours of exhaustive deliberations on issues surrounding the planned industrial action resolved that the Federal Ministry of Health should ensure speedy circularisation of all establishment and welfare matters as agreed during negotiation meetings.

”The Federal Government should ensure that the new data for the computation of the adjusted Consolidated Health Salary Structure (CONHESS) for JOHESU members be completed and submitted to the ‘High Level Body (HLB)’ of the FG not later than Wednesday, Sept. 22, as agreed.

”NEC-in-session urges the Federal Government to ensure that the High-Level Body (HLB) complete and submit the computation of the adjusted CONHESS for inclusion in the 2022 budget within the Sept. 30th, submission window.

”NEC urges the Federal Government to reciprocate the patriotic humanitarian gesture of JOHESU in the interest of the larger Nigerian masses to expeditiously resolve all the demands within the fifteen days window.

”Finally, NEC-in-Session unanimously adopts a resolution to step down the notice of strike action due to expire mid-night Sept.17, and issue a fresh notice of fifteen days,” the communique read in part.