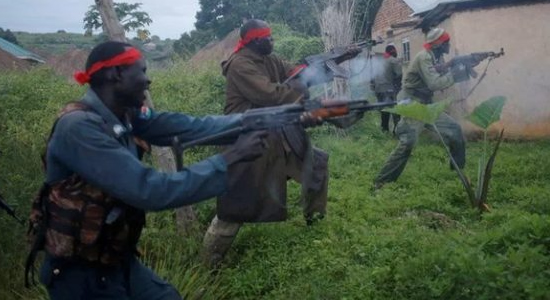 Asere community in Ese-Odo Local Government Area of Ondo State has been thrown into turmoil following an attack on the riverine village by suspected criminals terrorising waterways. The assailants razed 15 houses in a midnight attack The gunmen were said to have attacked the community for allegedly tipping off security agencies about their activities and movement. Angered by the move of the arsonists, women in the community who protested the attack and destruction of the community, called on security agencies to arrest the gang members.

The protesting women who identified the suspected gang members as Kutu Mone aka MK; July Mone; Best Oniwei; Iyemiyelawei Mone; Mathew Suku Polobubou; Dedewei Mone and Bado Ogbudugbudu lamented that the gang has been terrorising in the community for a while until security operatives started clamping down on them.

One of the protesters, who simply identified herself as Faith said the ringleader, Kutu Mone, who hails from Asere, attacked the community alongside his members because he felt his people were giving security men tip-offs about their activities.

According to her: “We saw fire burst out of our houses. We didn’t know what was happening. We all ran into the bush all through the night till security men came to our rescue.”

The Paramount ruler of Agadagba Kingdom, Oba Zachueus Doubra, while commenting on the attack said he received a report that one of his subjects, who he described as a ‘recalcitrant boy’ invaded Asere to burn down the community.

“I sent my chiefs and some police officers to the community and I was informed that 14 houses were burnt down, nine other houses vandalised. Many were rendered homeless. Many ran into the bush in pants, some in knickers.

“I want to appeal to all the three tiers of government and all relevant agencies to come to the aid of the victims by way of relief materials.”