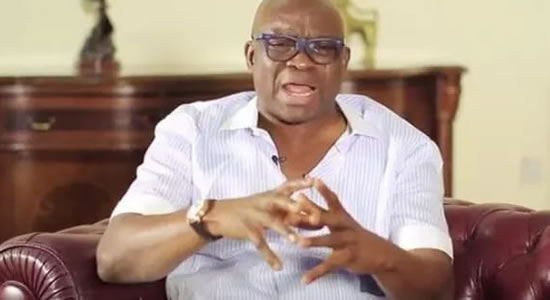 The immediate past Governor of Ekiti State, Mr Ayodele Fayose has displayed remorse and said he is sorry to all the aggrieved People Democratic Party (PDP) in the state, urging them to work together as a family in the overall interest of the party. The former governor made this statement in his country home, Afao-Ekiti on Tuesday while addressing party faithful across the 16 local government area of the state.

Fayose, who apologized to the aggrieved party members who he might have wronged during his tenure as a governor, he urged them to put their differences aside and work towards repositioning the party ahead of the next general election in the state.

According to Fayose, they are on a mission to repositioned the party, where he urged the party members to have change of attitude as there is nothing to be excited about failure, saying they must tell themselves the truth and make a resolve to join hands an arrive at something tangible that will be beneficial to all members.

His statement partly reads; ” I know some persons are aggrieved and I know we are humans. I apologize to all those that I have offended; let us come together in unity for this our party not to die in this state. That is my priority as a leader.

” I am doing this after one year I left office just to allow the present All Progressives Congress to display what they have for the people and you can all see for yourselves. I am not here for my selfish interest but just to ensure this party does not fail.”

Subsequently, he congratulated Senator Biodun Olujimi on the recent victory as the lawmaker representing Ekiti South Senatorial District, noting that she remains a party leader in the state.

He further assured members that once they are able to bury their differences, the party may be lucky to reclaim the sate back from the APC in the next round of the election.