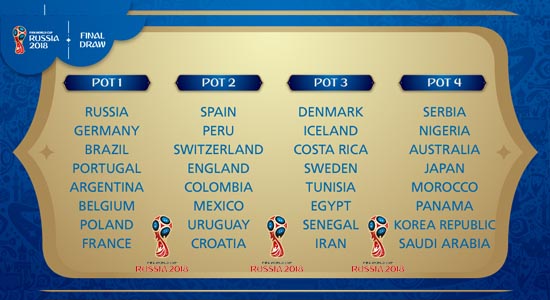 The Super Eagles of Nigeria have been placed in Pot 4 ahead of the 2018 FIFA World Cup draw billed for Friday, December 1 in Russia. The pots were announced by FIFA on their official website on Thursday.

It was confirmed in September, by the Organising Committee for FIFA Competitions, that all teams will be allocated to (eight-team) pots 1 to 4 based on sporting principles.

The October 2017 edition of the FIFA world ranking will be used to allocate all qualified teams to the four pots according to their ranking in descending order, after hosts Russia who take the top seeding spot.

As it is, Nigeria will draw one team each from Pot 1, Pot 2 and Pot 3, which are perceived to have stronger sides than Pot 4.


With the pots confirmed, the Super Eagles might be drawn against world heavyweights like champions Germany, Argentina, Brazil, France, who are all in Pot 1.

Other teams in Pot 1 are hosts Russia, Belgium, Poland, Portugal.

While in Pot 4 the other teams alongside Nigeria are Serbia, Australia, Japan, Morocco, Panama, South Korea and Saudi Arabia.