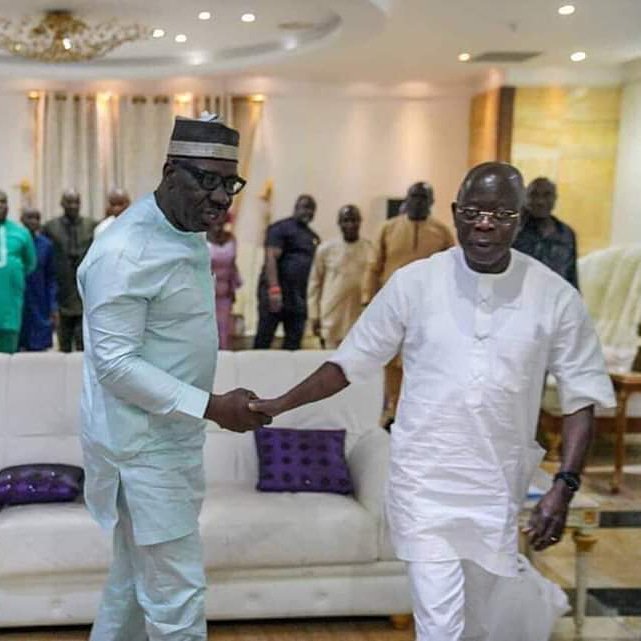 No Rift Between Obaseki And I - Oshiomhole

Following speculations that a brawl exists between the National Chairman of the All Progressives Congress (APC), Comrade Adams Oshiomhole, and the Governor of Edo State, Godwin Obaseki, the former has refuted the claims describing it as the creation of people with personal interests.

Com. Oshiomholemade the assertion on Monday night while receiving Gov. Obaseki who led members of his cabinet to celebrate the Eid-el-Kabir with him at his Iyamoh residence in Etsako West Local Government Area of the state. Speaking to journalists after a meeting behind closed doors which lasted for about an hour, Oshiomhole said the meeting was not unusual as he was in constant touch with Gov. Obaseki who he described as his brother.

Com. Oshiomhole said, “From time to time, we have always been meeting; it is not an unusual visit. The meeting afforded me the opportunity to meet with my brother and with people I have worked with.” advertisement He said it was unfortunate that the media liked creating factions for their own gain.

On his part, Gov. Obaseki said the visit to his predecessor was not unusual and that he decided to celebrate the Sallah with his former boss. He explained that the visit was to celebrate Edo leaders, just as the former APC National Chairman, Chief John Odigie-Oyegun, was celebrated at 80 by the state earlier in the day. He said, “There is nothing unusual about this meeting. Today is Sallah and we have just finished celebrating with the former APC National Chairman, Chief John Odigie-Oyegun, in Benin and we decided to come here to celebrate Sallah with my predecessor.” The governor, therefore, called on the people to stop thinking there was a rift between him and his predecessor.