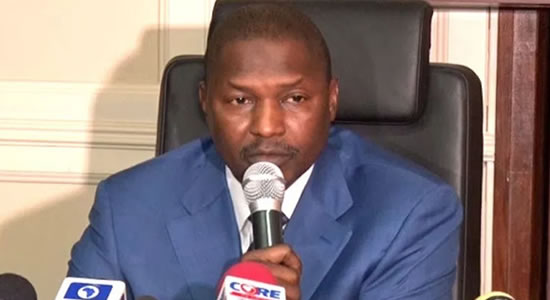 Malami: I Will Not Relent In Fighting Impunity By Pubic Office Holders

Nigeria’s Attorney-General of the Federation (AGF) and Minister of Justice, Abubakar Malami (SAN), has revealed that recent media attacks against him over the ongoing investigations of the suspended Chairman of the Economic and Financial Crimes Commission (EFCC), Ibrahim Magu, is a price to be paid for serving the country.

Malami made this disclosure in a statement released by his spokesperson, Umar Gwandu, on Sunday. According to him, the AGF will not relent in fighting impunity by public officeholders.

“I think that is the burden of leadership.

Whoever is appointed as a leader, it is only natural that in one way or the other, one must be attacked.

The good one has been doing can hardly be seen when one remains in office.

“It is a common tradition for people to attack the President, Governors, and those in the helm of affairs or in a leadership position. I cannot, certainly, be an exception.

“The good thing is our constitution is clear. Our law is clear about impunity and how can it be best handled and addressed.

It is not about the attack on personalities, but compliance with the law. We are there to fight impunity.

The bottom line is whether in the fight against impunity we are working in line and in tune with the law,” the statement read.