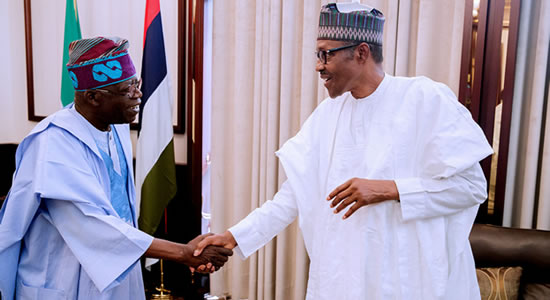 The National Leader of All Progressive Congress (APC), Asiwaju Bola Tinibu says Nigerians are tired of fasting, urged President Buhari to introduce a stimulus package into the economy instead of preaching austerity measure.

The former Lagos state governor stated this yesterday during his 12th Bola Tinibu colloquium held in commemoration of his 69th birthday celebrated in Kano state.

Speaking during the occasion with his speech titled, Our Common Bond, our Common Wealth: the Imperative of National Cohesion for Growth and prosperity; Tinibu revealed that even the United states which we copy most of our program from has released a stimulus package of $1.9tr to its citizen and has promised more will follow, advising President Buhari that such gesture will go a long way.

The APC chieftain advised that “It is time to put stimulus in place. This is no time for austerity. I hope you listen carefully. This is not the time to constrain the economy. This is the time to create the opportunity.

Tinibu explained that “If you hear America spending $1.9tn and they are not looking back and they are still asking for $3tn for infrastructure and renewal and creating jobs and your own unemployment rate is 33 percent and you ask us to keep on fasting. We are not fasting anymore.

He concluded that “We have been fasting for many years. I hope the National Assembly; I hope the President himself will not pay attention to austerity.”

The APC leader explained the nexus between insecurity and unemployment, saying a bad economy has made the youth willing tool for banditry and terrorism.

He called on the federal government to recruit more and more youth into the Nigerian Army to confront the insecurity head-on so that Nigeria will be at peace once again.

Tinibu confessed, Nigeria is under-policed and the nation is competing with armed robbers and bandits, therefore, it is perfect timing to take the unemployed youth off the street.

Speaking on the statistics of the National Bureau of Statistics (NBS) released which claimed about 23 million Nigerian youth are roaming the street; the APC chieftain said the government can create jobs for this army of youth in the Agricultural value chain.

He explains, “Don’t talk about illiteracy; anybody who can handle a gun, who can cock and shoot is technically competent to repair a tractor in the farm.”

The former Lagos State governor, however, applauded the “very creative” youths in the country, saying, “They are angry, they are showing their anger, but we are appealing to them.”

However, reacting to the recent rise in secessionist agitation, Tinibu revealed he deliberately chose Kano state as the venue to prove to people that Yoruba and Fulani have been and would always be brothers.