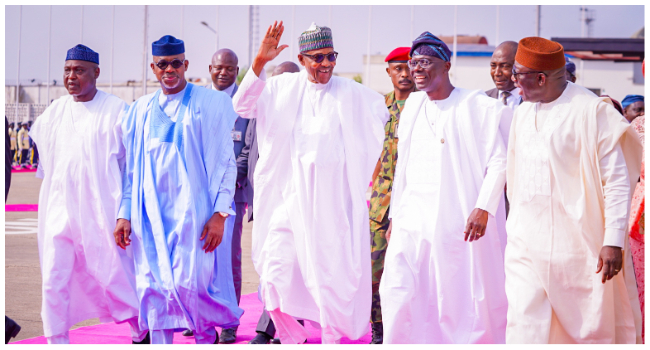 President Muhammadu Buhari arrived Lagos State on Monday afternoon for a two-day official visit to commission the Lekki Deep Seaport, Lagos Rice Mill, Imota, and other projects. The President was received at the Presidential Wing of the Lagos Airport by Lagos State governor, Babajide Sanwo-Olu; other state governors, amongst other dignitaries.

The $1.5billion Lekki Deep Seaport is the first of its kind in the country, with ship-to-shore cranes and three terminals: the liquid terminal, the dry bulk terminal, and the container terminal; capable of handling 2.5 million 20-foot standard containers per year.

The computerized system of the seaport will enable container identification and clearance from the office and reduce human interaction in its physical operations.

President Buhari on his arrival commissioned the Lekki Deep Seaport and the Lagos Rice Mill, Imota but is expected to commission other projects during his two-day official visit such as the 18.75 kilometers Eleko-Epe rigid pavement six-lane expressway; the First phase of the Blue Light Rail from Mile 2 to Marina and the John Randle Centre for Yoruba Culture and History.

The President is also expected to commission MRS Lubricant Factory, a private project in Apapa.