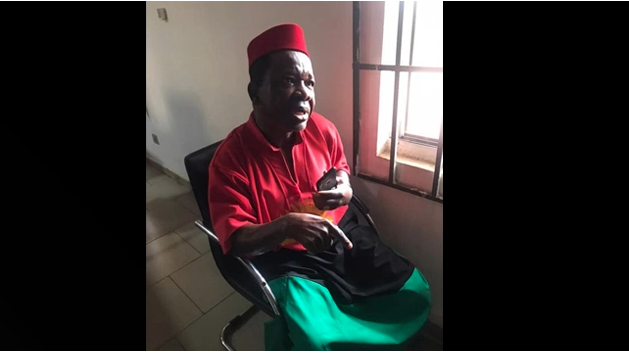 On 7th October 2021, a renowned Nollywood Actor, Chiwetalu Agu was apprehended in Anambra state by the Military, adorned in IPOB/Biafra regalia. According to the Military, the iconic Nollywood figure in the entertainment industry was allegedly arrested after he was caught soliciting support for one proscribed group identified as IPOB, as well as inciting the public against the authority. It is noteworthy that the arrest is coming few days after the Military commenced an operation tagged “Golden Dawn” in the South East, following incessant attacks and killing of security operatives and innocent residents in the region. Apart from the killing of operatives, cases of armed robbery, car snatching, attacks on POS operators, raiding of markets, mounting of illegal roadblocks as well as extortion of motorists have been reported. The question now is, did the Nollywood actor commit any crime to warrant arrest? YES. In September 2017, a federal high court proscribed IPOB and declared it a terrorist organization. The declaration followed an application by the Attorney General of the Federation and the Minister of Justice. The following year, IPOB appealed the declaration/judgement. Fortunately or unfortunately, the appeal was not upheld. Rather the court affirmed its earlier declaration. Consequently, in the face of the law, IPOB remains a terrorist group. Some of the characteristics of terrorist organizations include coercion, targeted assassination, kidnapping, violent confrontation with government forces, violent agitation for secession, armed robbery, using the instrumentality of fear to subjugate people, and so on.

A common test suggests that IPOB has met all these conditions. The group has killed hundreds of security operatives, established an army to confront the government, robbed innocent citizens, burnt government institutions, and threatened to sustain killings.

Should public figures or opinion molders identify with such groups? The choice is theirs. However, one thing is clear; the group is an enemy of the state. Its supporters, sponsors, sympathizers are also terrorists.

Suffice to say that Anambra is currently the epicenter of IPOB activities. In few days, several operatives have been killed. The terror elements have also vowed to frustrate the conduct of the forthcoming gubernatorial poll. It is enforcing the illegal sit-at-home order. Yet, this is the time that AGU elected to adorn IPOB/Biafra uniform. More renowned actors like KANAYO, PETE EDOCHIE, ZUBBY, NKEM OWOH, RITA, and PATIENCE among others are still shooting movies in the South East and selling the same in Onitsha without any issue. They are not less Igbos neither are they more Nigerian. They understand the times and laws.

The Nollywood figure by his action has tacitly demonstrated support for the killings of innocent civilians and security operatives, destruction of government properties, burning of Nigerian flags, non-conduct of the governorship election in the state, illegal sit-at-home order, killing of Akunyili’s husband, ongoing armed robbery and targeted killings of innocent Igbos. In plain terms, he supports terrorism. Let the law take its course. Influential persons in the society should use their positions to better the society by clamoring for good governance not supporting terror.