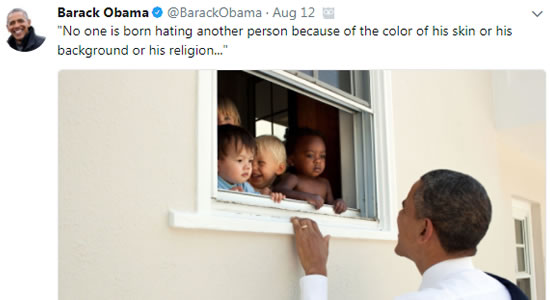 It may be President Trump's communication tool of choice - but it's a tweet by former President Barack Obama that has become the most liked in Twitter's history. The tweet, the first in a series of three, quoted Nelson Mandela and was accompanied by a picture of Mr Obama smiling with a group of children from different racial backgrounds.

It has been liked almost three million times since it was posted on 13 August following the attack in Charlottesville, Virginia.

The milestone was reached at approximately 01:07 GMT, Twitter told the BBC.

It overtook a tweet posted by Ariana Grande expressing condolences after the Manchester terror attack in May.

"No one is born hating another person because of the colour of his skin or his background or his religion,” the quote reads.

It was taken by the then-White House photographer, Pete Souza.

Since President Trump election win, Mr Souza has been posting topical images on Instagram, mostly highlighting Mr Obama's approach to the presidency in comparison to his successor.