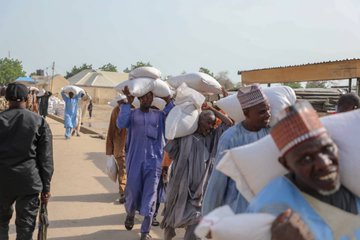 Despite an ambush attack on the convoy of Borno State Governor, Prof. Babagana Zulum by suspected members of Boko Haram terror group, the governor has continued his humanitarian actions and has delivered food items to about 80,000 Internally Displaced Persons (IDPs) in Borno State. The governor arrived Monguno LGA, on Monday where he personally supervised the distribution of relief materials and food items to IDPs from Marte, Guzamala, Kukawa, Nganzai, and Monguno.

This acts, according to report, has become his tradition to personally distribute palliatives to IDPs in liberated local government areas. This was his mission when the convoy ran into an ambush on Baga road.

Zulum was on Wednesday ambushed at Baga in the northern part of the troubled Borno state, after he left the State capital, Maiduguri on Monday to an undisclosed destination in the state.

Acting Director, Army Public Relations, Col. Sagir Musa, disclosed in a statement on Thursday in Abuja, that the Nigerian Army has initiated an investigation into the attack on the governor’s convoy.

“Although, details of the unfortunate incident are sketchy and under investigation, efforts are ongoing to comb the area where the incident occurred with a view to track down and deal decisively with the attackers,” Col. Musa said.