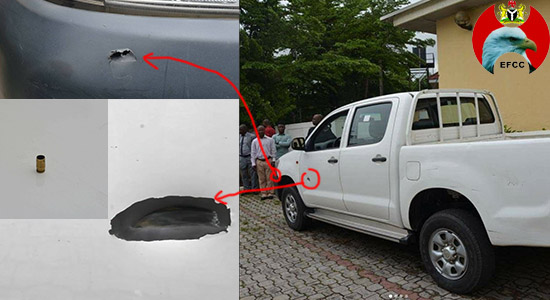 Unidentified gunmen on Wednesday attacked the Zone 7 office of the Economic and Financial Crime Commission (EFCC), Abuja and declared one of its operatives wanted. The spokesman of the Commission who made this disclosure in a statement released to newsmen in Abuja stated that the assailants were however repelled by security operatives deployed to the office. He however hinted that a death note was left behind for one of the agency's detectives by the assailants.

“A major security breach was recorded at the headquarters of the Economic and Financial Crimes Commission, EFCC, in the early hours of Wednesday, August 16, 2017, as unknown gunmen attacked the office located at Wuse Zone 7, Abuja.”

“The group of heavily armed bandits invaded the office at about 05.00 hours and began shooting into the premises, damaging vehicles parked in the premises in the process. However, the attack was repelled by guards on duty. The hoodlums escaped in a getaway vehicle but not without leaving a message; a white envelope dropped by the fleeing attackers was found to contain a death threat addressed to Ishaku Sharu, a senior investigator with the commission."