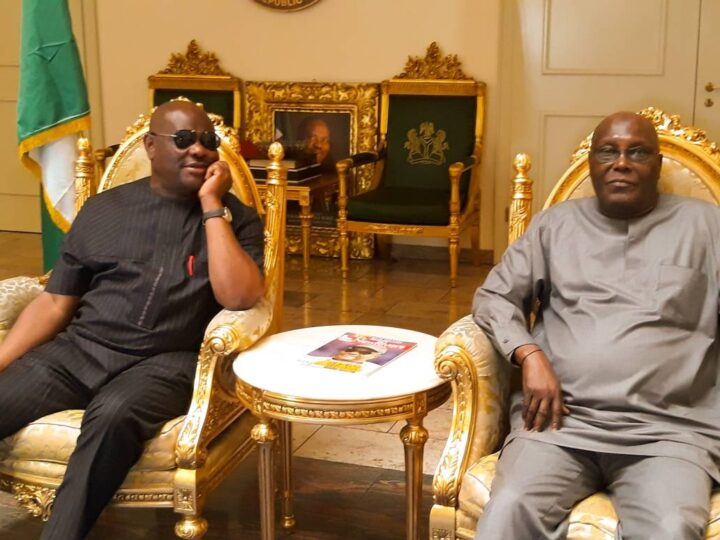 Atiku/Wike Feud: Parties Pledged To Settle Difference In One Week

A lot has been said about the Presidential candidate of the Peoples Democratic Party, PDP, Alhaji Atiku Abubakar, and his erstwhile friend, the Governor of River state, Nyesom Wike over faceoff resulting from the presidential primaries that fronted Atiku on board. Until yesterday, the two bigwigs meet in Abuja face-to-face behind closed doors at Prof. Jerry Gana’s residence, another Board of Trustee member of the party who brokered the peace deal between the two where they promised to settle their differences in one week's time.

Atiku Abubakar has on the same day announced Senator Dino Melaye and Daniel Bwala as his official campaign spokesmen with the PDP National Chairman, Dr. Iyorchia Ayu boosting that that the stage is set to take over power from the ruling party, APC come 2023.

It was learned that the two, contrary to people's speculations, exchanged banter in a friendly atmosphere before the meeting commenced behind closed doors.

A source disclosed that “The long-awaited meeting between our presidential candidate, Atiku Abubakar and Governor Wike, was held at Professor Jerry Gana’s residence today (Thursday). They both agreed to set up a joint consultation committee made up of an equal number of persons (from both sides) to thrash out the issues.

He assured me that “This should be done between now and next week after which they are expected to brief the various organs of the party. This is the first step towards the setting up of our Presidential Campaign Council. Very soon, all these challenges will be behind us and the ruling APC will know their time in office is up for good.”

Another source in Wike's camp revealed that “We all agreed at our meeting that our collective political interest will be better served in the PDP. The party belongs to all of us; what transpired before and after our primary is behind us now. “

Meanwhile, the media adviser to Atiku Abubakar, Paul Ibe said he was yet to be briefed by his principal on the meeting.

Recall vigil360 reported that since the outcome of the presidential primaries that returned Atiku Abubakar as the flag bearer of the PDP, the scheming did not go down well with the Wike’s camp leading to the acrimony.

Subsequently, contrary to some members’ speculation, Atiku picked Governor Ifeanyi Okowa as his running mate on a premise that he is more competitive among the candidate presented to him.

Governor Samuel Ortom, who chaired the committee during a media chart for the selection of a running mate, revealed Wike had the greater votes from their members as the preferred running mate to Atiku.

Moreso, in the run-up to the National chairmanship of the party, when the zoning issue was thrown up, the party chairman, being from the north promised to resign if a northern candidate emerged as the winner of the ticket, a promise that is yet to be redeemed.

However, another source from the party disclosed that if the meeting did not work out well, he is afraid, Wike may declare support for Peter Obi, the Labour party candidate just like the way Aregbesola did to Adeleke in the recent Osun Gubernatorial election.

The source added that “it is not about Wike’s people patronizing Atiku and Ayu. Demands and terms have been speculated in the public space. It is not for Wike or his associates to advertise or debate them in the media. When mutual understanding is reached, people will know because Wike is an open person who despises backyard talks.”