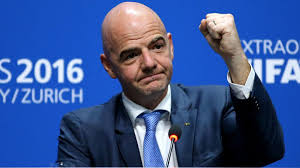 President Muhammadu Buhari on Thursday in Abuja urged the leadership of the world football governing body, FIFA to consider Nigeria top on its plan for support and investment. President Buhari expressed delight that Nigeria has produced excellent role models to inspire the next generation of stars to take up football. President Buhari made this request while receiving the FIFA delegation led by its president Gianni Infantino and the president of Confederation of African Football (CAF) Patrice Motsepe, at State House. They attended the opening match of maiden Aisha Buhari women’s football tournament; and NFF delegations. The President also called on the top echelon of football’s world governing body to see Nigeria as one of its greatest assets when it comes to the development of football. Mr. Infantino praised football’s uniting qualities, the power of the sport’s development, and the growth of women’s football during the two-day visit to Nigeria. He emphasised that exposure to high-level competition is the key to evolution for the Super Falcons, Super Eagles, and the wider, global game.

Infantino said ”We said (FIFA) have to make sure that a country, when a government with the president, the minister, and individuals invest in football, in the stadiums, we work with them to give them something back.

“It is obvious that stadiums like this (Moshood Abiola stadium) and others in Nigeria deserve the best quality games.

“They deserve the best national team games and best club games and it’s not just about Nigerian football or African football, it’s about world football.

“We are working together to see what kind of new opportunity, competitions we can offer the men and women to fill this stadium and make the heart of the stadium beat for the fantastic spectacle that all Nigerians love, which is football,” he said.

Meanwhile, Nigeria’s Super Eagles have maintained last month’s rankings by FIFA as they remain the 34th best-rated team in the world and fifth in Africa in the latest ratings released on Friday.

The FIFA rankings will take even greater significance next year by the time of the 2022 World Cup final playoffs to determine the five teams who will represent Africa in Qatar.

The top five on the continent then will also be the top seeds for the playoffs.

Senegal remains the top team in Africa as they are ranked 20th in the world.