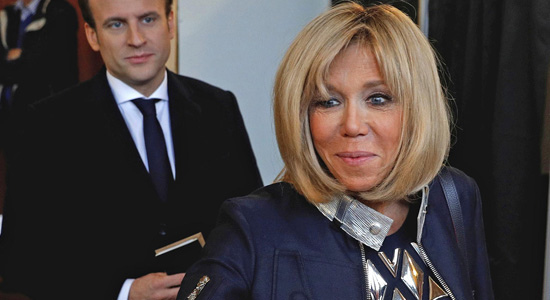 An online petition against making Brigitte Macron first lady of France has collected over 150,000 signatures. President Emmanuel Macron wants to officially establish the post, arguing that it will bring transparency to a situation that de facto exists. France has never officially had a first lady, although foreign and local media increasingly use the term to refer to the president's partner.

During the presidential election campaign, Emmanuel Macron declared his intention of officially creating the post, claiming that the move would end an example of "French hypocrisy" and allow oversight of expenses incurred by the president's partner.

But Thierry Paul Valette, an artist and actor who describes himself as "politically committed", does not agree.

He has launched a petition on change.org that argues that "there is no reason for the head of state's spouse to obtain a budget from public finances".


By mid-afternoon Sunday it had attracted 159,109 signatures.

Valette is at pains to condemn the "sexist attacks on Brigitte Macron", whose age - 25 years greater than her husband's - has attracted hostile comments, and the petition insists "we are in no way questioning her competence".

But it points out that the president's spouse has not been elected and claims that the creation of the position would allow the first lady to "use her role as she pleases, giving her a legal status that would allow her to profit from a budget".

These and other expenses, such as travel, present to the partners of visiting heads of state and receptions, are paid for out of the presidential budget.

In the course of the debate, hard-left MPs proposed an amendment to ban funds being granted to the president's partner.

Justice Minister Nicolas Belloubet argued that the law under discussion was "not an appropriate vehicle for defining that status" and the proposal failed.