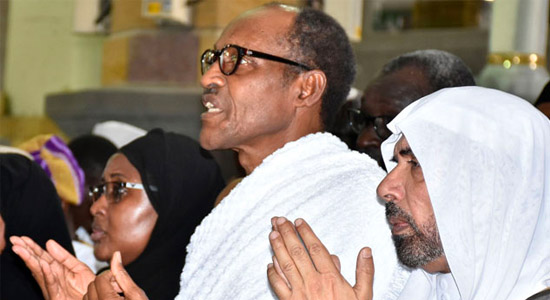 A video of President Muhammadu Buhari running while performing the Lesser Hajj in Makkah has become viral, triggering a lot of reactions from his supporters as it contradicts the despicable misinformation about his health painted by the media.

The video was first shot by Nigeria Television Authority, NTA and shared by many in various social media platforms.

It shows the President and his entourage at a point jogging while performing one of the rites of the Hajj at the Grand Mosque in Makkah.

Most of the commentators urged the persons who had painted the president as ill and unfit to hold public office to seek forgiveness from God.

Buhari who embarked on the journey with his wife, Aisha and close personal aides on Thursday, 16th May 2019, was invited by King Salman Bin Abdulaziz, the ruler of Saudi Arabia to perform the Lesser Hajj in the Kingdom. He is expected back in the country on Tuesday, 21st May 2019.